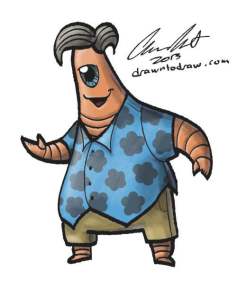 In the first version of my “graphical puzzle adventure” game I designed a character to slightly resemble Patrick Star. The character was originally the policeman that arrests the main characters for teleporting without a license. As I make plans to take another swing at the game series I have decided to keep all the characters on the planet within the same species. This is a tourist version. I am totally aware that Patrick does not have a segmented crustacean body or claws, but remember this isn’t Patrick.