On LinkedIn someone asked me about the significance of my logo. I was exceeding the 1000+ character limit and I still had more to explain. So here it is as a post.

The name came first because my creativity constantly pulls me to draw. And I love including puns: I draw my pencil to draw an image. I drew the gun so it could be drawn from the hip. What I draw will draw your attention. While doing Graphic Recording the artist must be quick, and I felt and old-west shootout would be appropriate. I also label myself as an ‘artist for hire’ so if you need me to draw/design something I will do what needs done.

There is also a personal significance:

My Grandfather’s favorite shows to watch were old westerns. Out on the ranch he definitely had the ‘cow-sense’ but he was also the kind of man with the integrity that would have made him a respected sheriff in the old west.

When I was in the 4th grade our rural school Christmas concert, the theme was “a cowboy christmas”. There was one scene where three deputies were facing off against three outlaws. I was the shortest deputy, so I was right up front stage. I didn’t have a toy gun, but Grandpa did. The night of the concert my Grandparents were halfway between Aetna and Del Bonita when they had to turn around because they forgot to grab the toy gun, but they made it in time. When it came time to draw my gun I did it exactly as I had been practicing for weeks… with no gun in had, thumb in the air and index finger forming the barrel… the entire audience laughed. I grabbed the gun to draw it for real. At the beginning of the play, in an effort to keep it from falling out of my front pocket I had shoved it in pretty good. Now I couldn’t pull it back out. More laughter from the audience. Finally I just shrugged and pointed with my finger-gun again.

For the rest of his life, Grandpa would remind me of that Christmas concert, and how he had to drive back to Aetna to get the gun, and I didn’t even use it. Instead of saying ‘hello’ we would quick-draw our finger-guns at each other and laugh.

When he passed away a few years ago the old toy gun was nowhere to be found. I bought a new one for him and tucked it in his casket, down by his hip. If he was watching from above I am certain he got a good chuckle out of it.

So there you go. My logo represents puns, aspects of what I do, and also a tribute to my Grandfather.

An important part of the Trichoplax project is the ability to “thread” to other planets. It is an instantaneous yet unpredictable method of travelling across the universe.

Here is a quick rundown of the theory. The universe is teeming with invisible, intangible threads. They act as conduits for various types of energy, moving that energy between points instantly. If you had the ability to interact with them you could pinch one off, sort of like a garden hose. The pressure of the energy pushing through the thread will instantly take any obstructing matter with it. That’s how they can move you across the universe instantly. However, these threads are constantly writhing, and popping in and out of existence. You would have no way to know where a thread begins and ends. And the odds of finding a way back home are near-infinity against you.

Early on this type of travel looked like the picture I drew today. It was fun to draw, but no longer quite so accurate.

My son requested a drawing of a puppy this morning. I started off thinking about what I wanted the puppy to be doing. About two years ago I was planning a series of experimental flash games based around a pug in a spacesuit. I was about to draw that character holding his helmet under his arm, but Ghostbusters popped into my mind. I was smiling at several points while drawing this.

There is a crack in the ugly scale through which pugs slip though and escape to the cute scale… usually. I remember going with my parents to visit some relative, a great-aunt I think. She had a pug. The eyes were the worst. They weren’t the adorable eyes normally attached to a pug. It’s hard to describe.

Todays picture was sketched in Painter12 with a gel layer over top for a quick colour job.

I wanted to give this design another sketch. Here it is with a quick colour scheme. I kept the arm count to two this time, and I like it better. I might change the costume a bit because I am thinking of using a variation of this design for a grandfather/scientist character. If you’ve ever hung out with me and gotten me talking about “Trichoplax” you may know which grandfather/scientist I’m talking about.

To be honest I came the point with a few friends where I told them that I wasn’t allowed to talk about Trichoplax anymore. If provoked I can easily talk about this project for hours on end, and it seemed like that’s all I ended up doing when hanging out with friends. I’ve been building the world/story/rules for almost 8 years now. There have been numerous revisions to parts of the back-story.

I’m not actively working on it right now, other than sketching characters. Before I really get back into it I have one other project I am going to finish first. 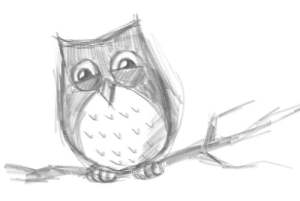 Normally you think of owls as dignified. But what’s up with this guy’s expression? And why is he leaning to one side? I resisted adding sound effects.

Yesterday afternoon I was working on some cover art for a book being written by another friend of mine who is an author. It took a bit of back and forth, but I get what style she is hoping for. It isn’t my usual style whatsoever, but after finding some good reference images I got started. I was getting really into it. Learning a new style is pretty fun, it gets you out of your usual rut. Not only that, but you pick up tricks that you wouldn’t have otherwise.

When kids ask you to draw stuff you can just about guarantee it is some pop culture character. Growing up I was asked to draw Garfield… a lot. But I would always say something to the effect of “I don’t like stealing other people’s characters. I want to draw something original.” Steve Jobs on occasion quoted Picasso as saying: “Good artists copy, Great artists steal.” Having read the biography about Steve I am not so sure the quote was real. But in a way it is true. Looking into the quote a bit more it goes back quite a ways. A similar statement was made about bad poets ruin what they take, but great poets improve what they take. I have come to think the same thing about art, and I regret not mimicking great artists and cartoons. I would have learned a lot about various styles and techniques.

But it’s not too late for me. That’s why I was really getting into the preliminary sketch for the cover art. I can’t show it now, but when her book is released I’ll be able to show it off, at least a watermarked version.